Scientists in the US who attached tracking devices to invasive pythons in order to observe their behaviour have found the gadget instead inside totally different snakes.
The researchers implanted radio transmitters inside baby Burmese pythons which had been captured from national parks in Florida and then re-released.

When they returned to the forest to find one of the Burmese pythons, they instead found a fully grown pitviper, known as a Florida cottonmouth.

X-Rays found the transmitter in the cottonmouth’s digestive system, indicating the baby python had ended up as an easy meal for the bigger snake.

The X-Ray also shows the python’s spine within the cottonmouth.

The cottonmouth was kept by the scientists for a week until the transmitter was “expelled”. The snake was then released back into the wild.

The researchers then tracked a second cottonmouth who appeared to have eaten a Burmese python with a transmitter inside it.

They did not take this cottonmouth into captivity, but tracked it until it also “expelled” the transmitter.

The cottonmouths were lucky to get the pythons when they were young. Burmese pythons typically grow to 5m in length.

The Burmese python is considered one of the most invasive species in the United States.

Introduced as pets into the country from southeast Asia, the giant snakes are now thriving in Florida, making short work of smaller species.

They also pose a threat to coyotes, panthers and alligators.

Cottonmouths are substantially sized for venomous snakes, reaching up to 180cm in length. 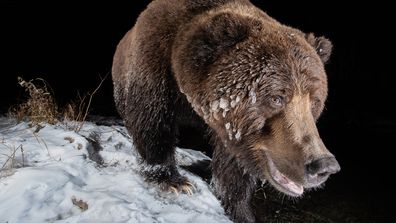 About one in five people bitten by cottonmouths will die from the venom, which causes necrosis and extreme haemolysis, which essentially causes red blood cells to explode.

Both Florida cottonmouths and Burmese pythons are largely aquatic.

Cottonmouths are generalist predators but are well-known consumers of other snakes.