New research has predicted tens of thousands of Australian workers will develop lung cancer in their lifetime due to exposure to silica dust.

A study funded by the Australian Council of Trade Unions estimates more than half a million Australian workers are being exposed to the toxic dust resulting in an increase in related diseases.

“Our modelling predicts more than 10,000 Australians will develop lung cancer and up to 103,000 workers will be diagnosed with silicosis as the result of their current exposure to silica dust at work,” Lead researcher Dr Renee Carey, from the Curtin School of Population Health said.

The study found Australian workers in the construction, mining and quarrying, and manufacturing industries are being exposed to the dust which is found naturally in many products like sand, soil, stone and concrete.

While previously disease relating to silica dust was rare in Australia, an increased use of engineered stone – used mainly for kitchen benchtops – is driving a rapid rise in related disease.

Experts are now pushing for engineered stone to be banned and for alternate options to be explored, believing almost 100 lung cancer cases could be sparred and a thousand silicosis cases prevented if so.

“While a complete ban of engineered stone would be the best option, it is possible to reduce the health impacts of working with engineered stone by various methods such as mandatory wet-cutting or on-tool dust extraction, as long as these methods are combined with the consistent use of high-quality respiratory protection,” Co-author John Curtin Distinguished Professor Lin Fritschi from the Curtin School of Population Health said.

“The main focus, obviously, in the last couple of years has been on engineered stone because it has quite a high crystalline silica content and we’re getting people who are in their 20s being diagnosed with silicosis,” he said.

“In terms of engineered stone, we can probably look at, you know, why aren’t we using more marble and that kind of thing because there’s far less crystalline silica in marble than there is in engineered stone,” said Ayers.

While workplace safety for bricklayers and other construction workers had improved vastly over the years, Ayers said the health effects of crystalline silica exposure would be keenly felt for years to come. 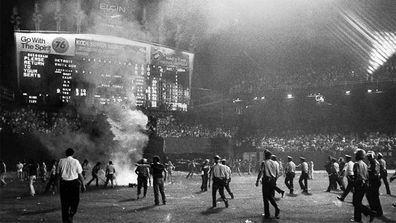 ‘Disco demolition’ baseball promotion so successful game had to be cancelled

“They talk about the third and fourth wave of asbestos exposure, we will probably feel the effect of crystalline silica dust, and products which contain crystalline silica, for quite a number of years yet,” he said.