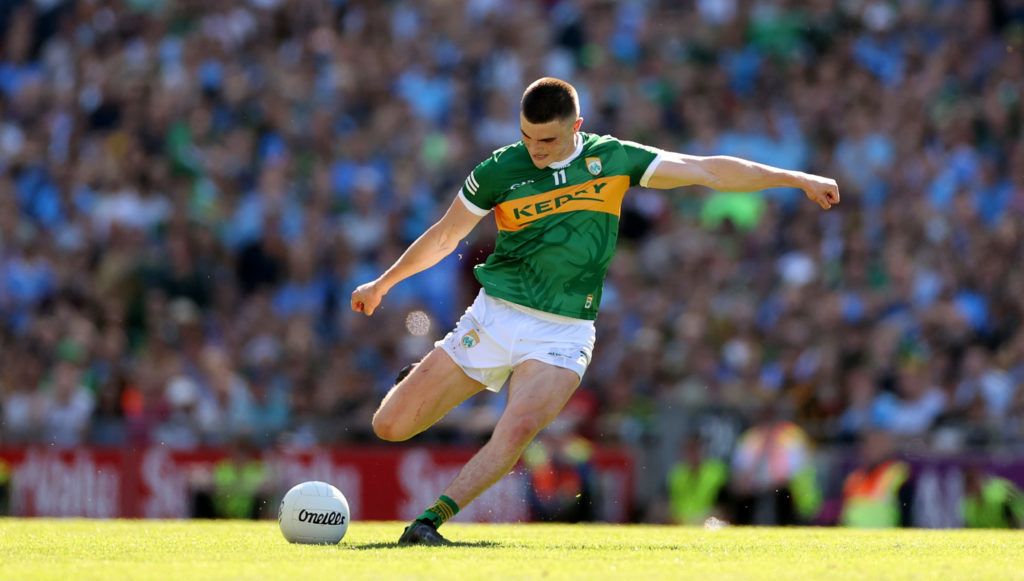 Captain Sean O’Shea has kicked Kerry into an All-Ireland Senior Football Final against Galway after defeating Dublin at Croke Park.

A second-half revival from the Dubs put Kerry to the knife, however, a pointed free from cool-headed O’Shea seconds before the final whistle was enough to keep Dessie Farrell’s men from July 24th decider.

After trading points after the throw-in, O’Shea laid down his marker, snatching a goal in the fourth minute.

Seán O’Shea rattles the net to put @Kerry_Official in front in the fourth minute. pic.twitter.com/ma1Un0GTkq

Dublin responded quickly, and despite denied a shot on goal, points from Dean Rock and Brian Howard steadied the ship, leaving them just a point down.

Wides started to pile up for Dublin, with Kerry slowly but surely extending their lead back to four.

Drama hit just before the 30-minute mark, with a penalty signalled for a foul on Kerry’s Gavin White. O’Shea stepped up to the mark, but Evan Comerford held strong to block the low strike tracking for the bottom left corner.

Tempers flared when O’Shea made a second attempt on the rebound, his boot making contact with Comerford’s head who had scrambled on the ground to retrieve the ball.

Referee Paddy Neilan saw no fault in the challenge, however, and with play resumed, David Clifford claimed one last point to leave the score 1-8 to 0-6 at half-time.

The Dubs are back in the game thanks to a brilliant Cormac Costello goal. @DubGAAOfficial trail by two. pic.twitter.com/QGc9TWpu2h

Dampening the excitement of the closing minutes of the first half, the resumption saw both sides trying desperately to hold possession.

The game came alive once again however when Cormac Costello capitalised from a poor mistake from Kerry in the 46th minute, bringing the Kingdom’s lead back to two points.

A quick point from Ciarán Kilkenny left the scoreboard reading 1-10 to 1-9, with Dublin looking the more energised of the two sides.

Looking to kill the clock, Kerry again opted to hold possession, with Paudie Clifford keeping the scoreboard ticking to bring their lead back to three.

With less than 10 minutes of ordinary time left on the clock, Dublin again made their move – Kilkenny and McCarthy each raising the white flag before the former finally took the leveller in the 69th minute.

O’Shea and Rock again traded points to leave the game tied for the third time, with extra-time looking like the probable outcome.

In the final minute of added time, Kerry won a free just outside the 45. Nothing to lose but everything to gain, O’Shea took his chance, pointing the winner for the Kingdom to seal the win.

Kerry will now face Galway, who beat Derry in Saturday’s semi-final, in the All-Ireland Senior Football Final on July 24th.