A landmark schism in one of Australia’s biggest churches has underscored the deepening religious divide in the country.

Geoffrey Smith, the Primate of the Anglican Church in Australia, today issued a statement lamenting the establishment of a breakaway diocese by some church members.

As reported by the Sydney Morning Herald, some conservatives within the church who oppose same-sex marriage have gathered under the leadership of former Sydney archbishop Glenn Davies to establish the Diocese of the Southern Cross.

Davies told the Herald he predicted the defection would “send shivers down the spines” of some Anglican bishops in Australia.

The Diocese of the Southern Cross’ website says it is made up of churches all across Australia “dedicated to faithfully proclaiming the gospel”.

But Smith, an Adelaide archbishop who heads the Anglican Synod in Australia, criticised the move.

“The meeting of the General Synod held in May this year clearly affirmed the view that marriage is between a man and a woman, and declined to affirm same sex marriage.

“It is perplexing therefore that the leaders of this breakaway movement cite the reason for this new denomination as the failure of General Synod to explicitly express an opinion against the blessing of same sex marriages.”

He called on churchgoers to live together with their differences in a “tragically divided world”.

“My conviction is that the Anglican Church of Australia can find a way to stay together, graciously reflecting God’s great love, with our differences held sincerely,” Smith said.

“This week’s announcement makes achieving that end more difficult but not impossible.” 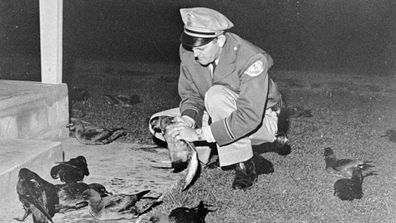 Hundreds of birds launch suicide attack on small US town

The Diocese of the Southern Cross has acknowledged the role of GAFCON, the conservative Global Anglican Future Conference, in their founding.

“The formation of the diocese has been welcomed by GAFCON Primates,” the organisation says on its website.

“There are similar dioceses in the USA, Canada, Brazil and New Zealand, where the established Anglican Church in these countries has departed from the teaching of Scripture.”

The new diocese confirmed it was not part of the Anglican Church of Australia.