A farm north of Sydney that was underwater just days ago is now crumbling into an enormous sinkhole.

The river is swallowing the south bank and taking an enormous bite out of the land and house at Archerfield Farm.

The back of the cottage has caved in, and the lawn is now a pit of dirt and water.

The owners called their neighbours on Monday morning warning them to steer clear of the banks.

The farm has a rich history dating back to the early 1900s.

It was owned by former INXS manager Chris Murphy for 16 years and stayed in the family when the music industry giant died last year.

Murphy bred polo horses there and recently listed one of its two picturesque cottages as a country getaway on Airbnb.

The serene backdrop even featured on an episode of The Bachelor.

Fire and Rescue NSW experts said it looked like erosion of the riverbank was to blame.

The area has been hit by floods three times this year alone.

“The cause will be subject to an assessment by engineers but it does look like riverbank erosion that’s led to the collapse of the surrounding land,” Chief Superintendent Michael Morris said.

“We’ve had an area of riverbank erosion that’s led to collapse of land around the property.

“We were very fortunate today that the property was already evacuated and that there wasn’t anyone in attendance when the property has been affected by the landslip. 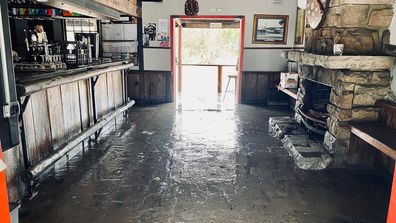 “It was extremely lucky given the extent of the scar on the landscape.”