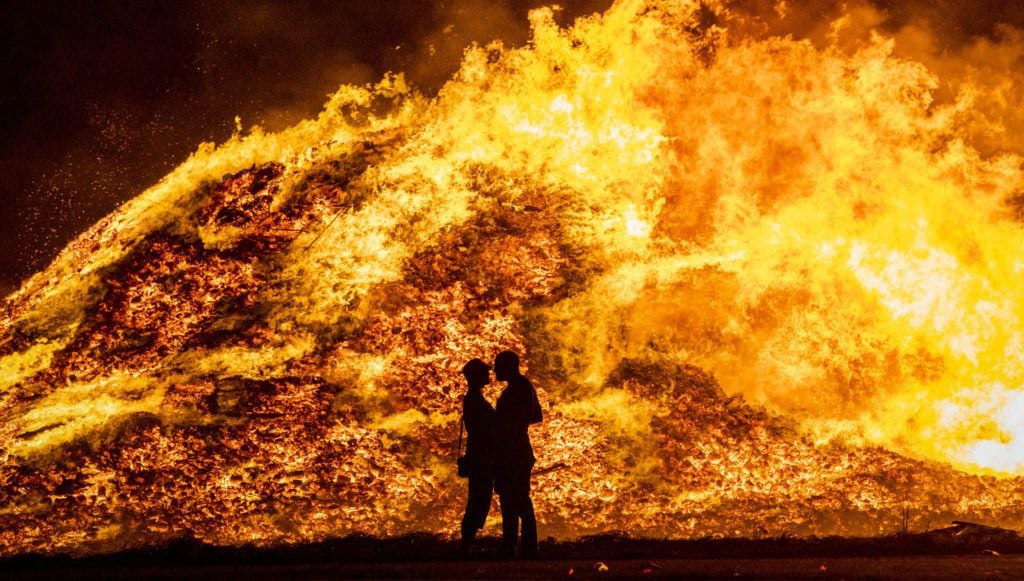 Fire and rescue crews in Northern Ireland recieved a total of 203 emergency calls on the first night of the Twelfth of July events.

As hundreds of bonfires were lit across loyalist areas, Northern Ireland Fire and Rescue Service (NIFRS) responded to 98 operational incidents.

A spokesperson said there was a 12.5% decrease in bonfire incidents compared to 2021, with the night’s activity reaching its peak between 11pm and 1am.

They added that between 6pm on Monday and 2am on Tuesday, 35 of the 98 operational incidents NIFRS responded to related to bonfires.

“NIFRS maintained normal emergency response throughout the evening, attending a range of operational incidents including special service calls, a road traffic collision and other emergencies,” the spokesperson said.

The Eleventh Night is traditionally the Police Service of Northern Ireland’s (PSNI) second busiest and most resource-intensive day of the year – with the Twelfth Night being their busiest.

Earlier in the night, PSNI said there will be 2,500 police officers on duty on the Twelfth, which is around a third of the strength of the PSNI.

There will be 573 loyal order parades later. Of these, 33 follow routes that are deemed to be sensitive.

But before the fires were lit, police said that they were investigating multiple reports of flags, effigies and election posters being placed on bonfires.

Nearby houses had their windows boarded up and the fire service hosed down properties to protect against the heat of the massive bonfire.

The build-up to the Eleventh Night celebrations was overshadowed by the death of a bonfire builder in Co Antrim on Saturday night.

John Steele, a window cleaner who was aged in his mid-30s, was killed when he fell from a separate bonfire in Larne that stood more than 50 feet tall.

In total more than 250 bonfires were constructed in loyalist neighbourhoods across Northern Ireland.

This year there have been a number of complaints from nationalist and cross-community politicians about their images being placed on the fires.

It’s extremely disappointing to see my election posters alongside this sectarian message on an eleventh night bonfire. Leaders in the unionist community need to call these actions out and put a stop to this once and for all. pic.twitter.com/82zN5LQYHx

The SDLP’s Paul Doherty condemned those behind putting his election poster on a bonfire in west Belfast.

He said: “While I respect everyone’s right to celebrate their culture in their own way, we regularly see posters of nationalist representatives and hate speech on these bonfires and we need leaders in the unionist community to call it out and put a stop to it once and for all.

People Before Profit MLA Gerry Carroll said his election posters were also placed on the bonfire.

He said: “Unfortunately there has been a deafening silence from many unionist politicians in the face of this kind of sectarian intimidation.

“It is time for leadership, and to demand an end to this provocation.”

Alliance Party MLA Stewart Dickson tweeted: “Saddened to see once again Alliance and other party election posters together with flags ranging from the EU to the Vatican and the Republic of Ireland on bonfires in East Antrim.”

“We are gathering evidence in respect of these complaints and will review to establish whether offences have been committed.”

Another fire lit at midnight was at Adam Street in the loyalist Tigers Bay area of north Belfast. Nationalist residents from the nearby New Lodge estate have previously claimed the fire is located too close to the interface between the two communities – something the bonfire builders have denied.