WARNING: Aboriginal and Torres Strait Islander readers are advised this story contains images of a person who is deceased.

Friends, family and fans have turned out across Victoria to farewell Australian music legend Archie Roach.
The late singer-songwriter’s life was celebrated as his hearse was driven across Melbourne before he is laid to rest in Gunditjmara Country, Warrnambool.

Hundreds of people lined the streets of Melbourne to farewell Roach today, with the procession moving through Collingwood, Fitzroy, St Kilda and Melbourne’s CBD.

Escorted by the Southern Warriors Aboriginal Motorcycle Club, the group gathered in St Kilda at Cleve Gardens, an important meeting spot for the late singer-songwriter and his family.

Among those remembering him today was his niece, Donna Roach. 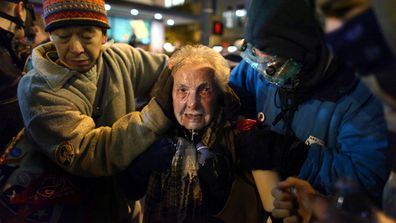 In memoriam: The famous people who have died in 2022

“His greatest contribution was his music and his love for his family,” she said.

“He was my uncle, he was my best friend. He is going to be so missed.”

Roach was named the 2020 Victorian nominee for Australian of the Year, when he paid tribute to his late partner Ruby Hunter (also known as Aunty Ruby, a Ngarrindjeri and Erawirung woman), who died in 2010.

Later the same year, the performer was inducted into the ARIA Hall of Fame and in 2013, he received a Deadly Award for a Lifetime Contribution to Healing the Stolen Generations.

Two mosaic pillars were erected on the edge of Lake Bonney in the South Australian Barmera Riverland in May this year to honour the couple’s legacy in the region.

The activist was named on the Queen’s Birthday Honours list in 2015 and made a Member of the Order of Australia. He was inducted into the Victorian Aboriginal Honour Roll in 2011.

The music icon will be farewelled in a private family funeral, but his loved ones are also planning a public memorial so everyone will have the chance to say goodbye to Uncle Archie.

Archie Roach’s loved ones have given permission to use his name and image, to ensure his music and legacy will continue to inspire.