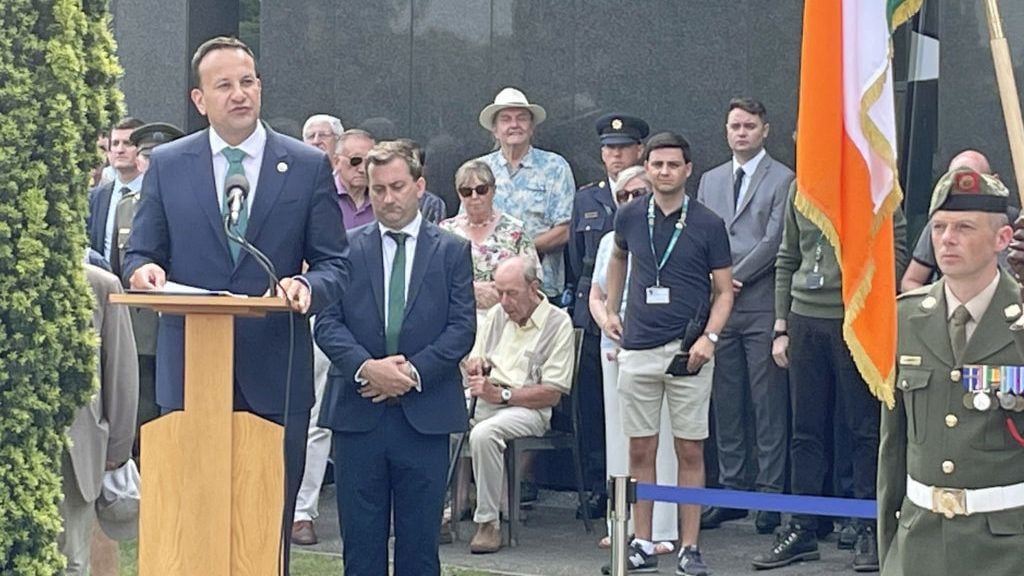 The Tánaiste Leo Varadkar said history has been made at the centenary commemoration of the death of Irish revolutionary Michael Collins, as the leaders of Fianna Fáil and Fine Gael made a joint address.

While Taoiseach Micheál Martin said the death of Irish revolutionary Michael Collins deprived Ireland of its best hope of reconciliation.

Mr Martin made history on Sunday when he became the first Fianna Fáil Taoiseach to speak at a commemoration for Mr Collins.

The two parties were founded from opposing sides of Ireland’s civil war of the 1920s, a split that has continued to be part of Irish politics for the last 100 years.

Mr Collins was shot and killed during an ambush by anti-Treaty forces on August 22nd, 1922 near Béal na Bláth in Co Cork during the civil war.

The identity of the shooter remains a mystery.

He added: “Civil wars, by their very nature, leave a bitterness which can take a very long time to heal, whether in Ireland, Spain, the United States or Greece.

“Undoubtedly, the Irish civil war was such a conflict and left a painful legacy which stunted our development in the years that followed.

“Dear friends, colleagues, civil war politics ended a long time ago in Ireland, but it only ended in our Dáil when we formed the historic three-party coalition of Fine Gael, Fianna Fáil and the Green Party in June 2020.

An Irish hero of the 20th century, Michael Collins is also a beacon for Ireland in the 21st century.

He guided our path to independence, sought to avoid civil war and helped to make possible the Ireland we live in today.

Today we honour him. pic.twitter.com/wiSWU6LWfg

“Allow me to thank the Taoiseach for accepting today’s invitation, and for the leadership and dedication he has shown over the past two years, and also for keeping a portrait of Cork’s greatest son on the wall of his office.”

Paying tribute to Mr Collins, the Tánaiste described him as the “great prophet of freedom” who was killed before we reached the promised land.

“That was the great tragedy of Béal na Bláth, and the curse of the civil war,” he added.

“By commemorating his death each year, we remember his sacrifice and make an act of faith in the Ireland he and the revolutionary generation wanted to achieve.

“This event is therefore an opportunity to remember his life, reflect on what has been achieved, and where we have fallen short, and renew our determination to do better.

“He was both an idealist and a realist. And as he predicted, the Treaty gave us freedom and the freedom to achieve more freedom in the future.

“Others fought on for decades, only to accept Collins’s approach almost 100 years later.

“He had the courage to make peace and accept that, in doing so, he could not take everyone with him. It cost him his life, but his legacy and mission live on.”

While Taoiseach Micheál Martin said: “It is perhaps the greatest tragedy of Collins’ death that it deprived us of our best hope for reconciliation.

“The bitterness which grew out of the events of the following year showed how much was lost in this place.

“He deserves our gratitude and he deserves to be remembered as one of the greatest Irishmen to have ever lived.

“The crowd gathered here today, the presence of representatives of different traditions and the role of Oglaigh na hEireann in honouring a fallen leader shows how far we have come since the first anniversary of Michael Collins’ death.

“In his short 31 years Michael Collins made a deep, lasting and positive impact on our country.

“Shaped by the ideals of his community, he devoted his life to his country.

“He was a dynamic leader who could both inspire people and, in the middle of a bloody conflict, build a new administration from nothing.

“He is a key reason why we have been able to build a country which, while it still faces major challenges, has been transformed for the better.”

There were occasional jeering and booing from the crowd during Mr Martin’s speech. The crowd attempted to drown out the booing with large cheering and clapping.

Descendants of Mr Collins travelled from across the world to attend Sunday’s event on the eve of the centenary of his death.

They joined the thousands of people who travelled from across Ireland to gather at the ambush site, where the Michael Collins Memorial Cross is situated.

His role in Ireland’s fight for freedom and independence came to prominence following Neil Jordan’s biopic of the leader and Tim Pat Coogan’s book, Michael Collins: A Biography.

Mr Collins was part of the delegation which signed the Anglo-Irish treaty in 1921, leading to a split in the Irish Parliament and to the Irish civil war.