Barren battery cages, which are used to contain egg-laying hens, are set to be banned in Australia from 2036 in what the RSPCA is hailing a “significant win for animal welfare”.

National Poultry Standards and Guidelines have today been finalised after being reviewed for more than seven years, with the new guidelines including a plan to phase out battery cages for layer hens by no later than 2036.

“This is a win for animal advocates and for the community, who have been calling for an end to these barren, wire cages for over 40 years,” RSPCA Australia CEO Richard Mussell has said.

“But most importantly, it will eventually be a win for the millions of layer hens confined to battery cages.”

Approximately 5.36 million layer hens were confined to cages in Australia in 2020 to 2021, representing 32 per cent of the country’s hens, according to Australian Bureau of Statistics data.

Mussell said the ban would “bring Australia into line” with more than 75 per cent of of Organisation for Economic Cooperation and Development countries who have already moved to phase out battery cages.

RSPCA Australia chief science officer Dr Suzie Fowler has called use of the cages “one of the worst animal welfare issues in Australia right now”.

“Good welfare simply can’t be achieved in a battery cage because the animal welfare issues are inherent to the system itself – restricted movement, constantly standing on a wire floor, and no ability for a hen to perform natural behaviours like perching, nesting and stretching and flapping her wings,” she said.

“The ACT did this in 2014 and we urge all state and territory governments to do the right thing and implement a phase out as soon as possible,” he said.

Mussell said the delays in the process for getting the national ban implemented had exposed flaws in Australia’s current approach to the developing and implementing animal welfare standards.

“These Poultry Standards and Guidelines were under review for nearly seven years. The phase out is the right result, and it should have been put in place six years ago,” he said.

“Millions more layer hens have had to endure barren battery cages as a result of these delays.” 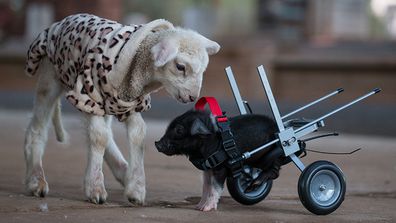 The incredible animals of a Melbourne farm sanctuary