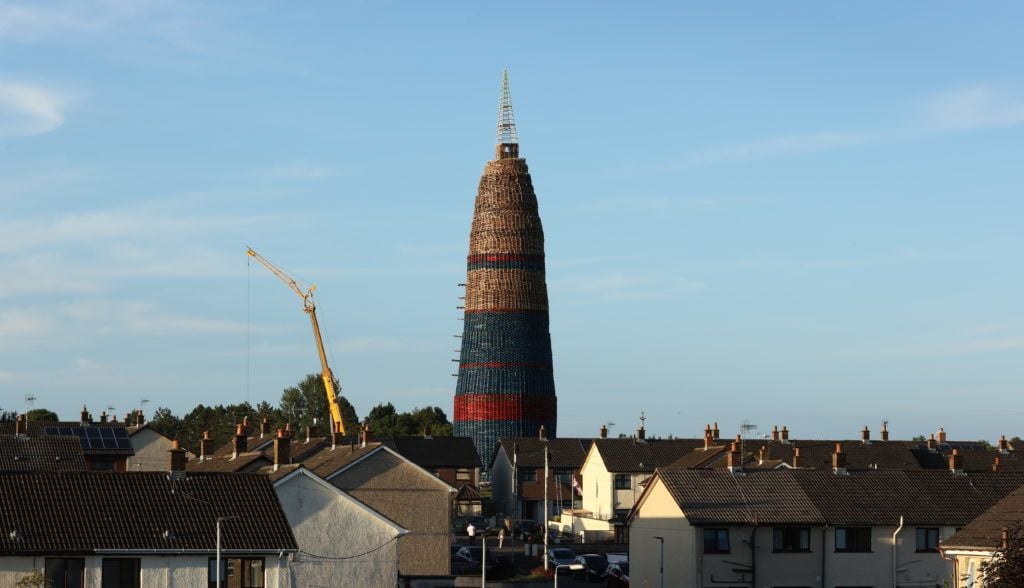 An attempt to set a new world bonfire record in Co Antrim has gone ahead in memory of a man who died in a fall at a nearby pyre.

John Steele had been helping to build a 50ft bonfire in Antiville in Larne when he fell on Saturday.

It was dismantled on Sunday night as a mark of respect and a vigil was held for Mr Steele.

However, a short distance away in Craigyhill in the town, a world record attempt bonfire went ahead.

James Brown, from the Craigyhill bonfire committee, said they finished building the structure on Sunday night, adding it is around 220ft (67 metres) tall.

The current world record for the highest bonfire is 198ft, and was set in Lustenau, Austria, on March 16th, 2019.

Mr Brown explained they wanted to bring the record to Northern Ireland, describing it as the “home of the bonfire”.

“We all sat around, the committee, and talked about the record set in Austria,” he told the PA news agency.

“We thought Northern Ireland is the home of bonfires, so why isn’t that record here. So we decided to go for it, to try our best to set a new record.

“We fundraised for nearly 10 months, and then spent two months building it.”

He said a lot of additional thought and work was put into this year’s pyre given the greater height.

“If you’ve seen it, you’ll see all the blue and red palettes. They are a stronger palette, and take a lot more weight and pressure. That was key for us, to be safe and get the height.”

A local company is to take measurements of the pyre and issue a certificate which the bonfire committee will send to the Guinness Book of Records for consideration.

Mr Brown said that following Saturday night’s tragedy, they spoke to Mr Steele’s family and were asked to proceed with the record attempt.

“Obviously it was a tragedy, something you never thought you would have heard close to home, our hearts go out to John’s family and close friends, and to the Antiville bonfire committee,” he said.

“Talking to the family, they wanted us to push on for the record in John’s memory so that gave us the determination to go ahead and smash the record for John – and that’s what we have done.”

Twelfth commemorations in Northern Ireland mark the victory of Protestant King William of Orange over Catholic King James II at the Battle of the Boyne in 1690.